COLUMBIA- A Columbia resident's Facebook status went viral after he posted a video of an Eagle Stop gas pump charging for gas that wasn't flowing.

Kevin Boyer said he went to the Providence and I-70 location of Eagle Stop on January 18 for a routine $10 fill-up. He got his $10 worth, but something wasn't right.

"I look up and see the pump still turning, but no gas is coming out," Boyer said. When the meter stopped ticking, Boyer owed an extra 38 cents.

Boyer decided to film the issue this time, because as recently as a month and a half ago, he said he had been overcharged for gas he didn't receive at the same location.

"First time that's fine, I understand, things happen," Boyer said. "It happened again, that's when I went in and told them. They said, 'It's because it's cold outside.'"

The three times Boyer experienced this issue he said employees at Eagle Stop told him the problem had to do with cold weather affecting the pumps.

"They said, 'There's nothing we can do about it.' It's 38 cents, I'm not worried about that," Boyer said. "But the simple fact is, how many other people?"

Boyer shared the video on his Facebook page, garnering almost 2,000 shares and more than 800 comments. Among them were other customers who said, within at least the past month, they've also been charged for non-existent gasoline.

Edward House, CFO of Eagle Stop and member of the company's ownership group, was made aware of the issue on Friday evening, and said the company quickly responded.

"The pump was bagged off and repaired by Saturday morning," House said.

House said a broken check valve caused the issue. A check valve creates an airtight seal above the gasoline to prevent fluids from falling back into the main tank.

"Just like any other mechanical device they are susceptible to failure or malfunction," House said.

Eagle Stop's policy is to immediately isolate pumps that have had a customer complaint as soon as possible until they can be repaired, but House wasn't able to comment on whether that happened according to protocol.

"Without concluding our internal investigation, I can't really speak to when anybody within our organization was first notified prior to the time I myself or when our other primary owners found out," House said.

However, House said he is making sure employees are quick to respond to issues like these.

"We're going to definitely take a look at that and see if there's an additional training opportunity or really just see what we need to do to make sure that type of reaction to these incidents are in fact being taken at every level," House said. 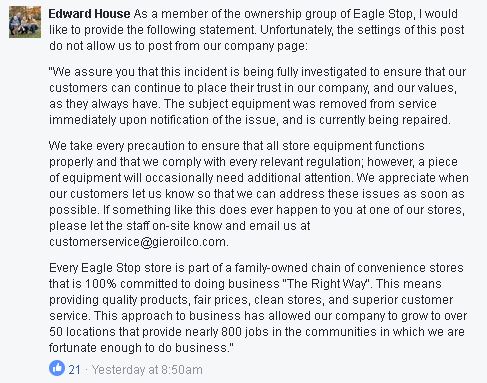