CHARITON COUNTY - Coming from a big family, Chariton County resident Raechel Lindbloom was looking forward to being the center of attention on her wedding day. Months of planning, preparation and stress were all leading up to the big day.

But COVID-19 had other plans for the bride and groom.

Lindbloom and her fiancé, William Ostermann, were supposed to get married on May 2 at their farm in Rothville. They planned to say their vows in front of all their friends and family.

“We flipped a coin on if we were going to postpone it or not, sooner rather than later," Lindbloom said. "And we decided to postpone it."

It’s not a coin flip, however, for the wedding vendors playing the odds their businesses will survive the pandemic. When a wedding is put off, there are on average 15 businesses affected.

Caterers, venues and florists all depend on business from the wedding industry, an industry that brought in over $70 billion in the U.S last year. 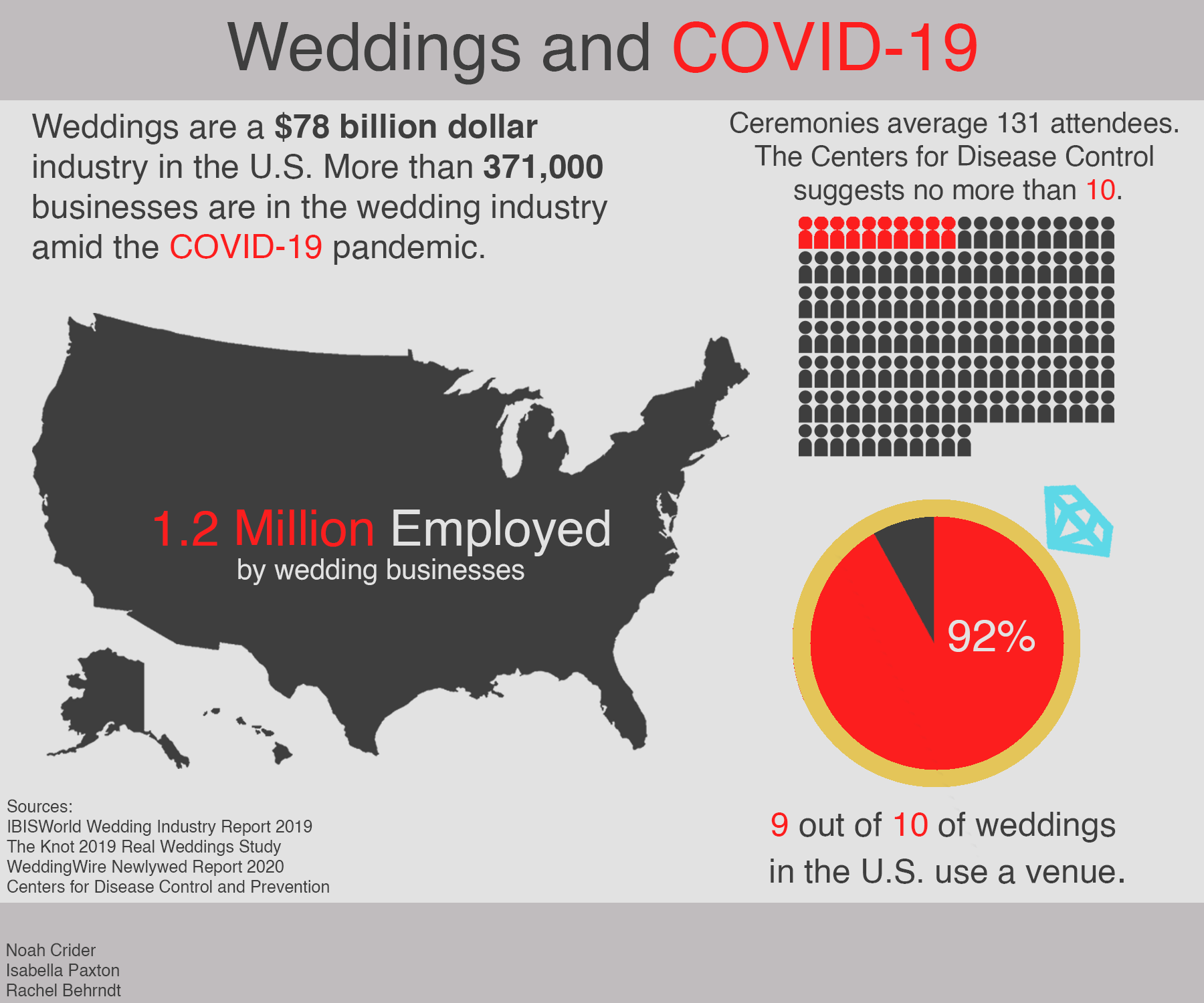 There were over two million weddings in the U.S. in 2018. Vendors losing 10-15 weddings all at once means huge losses for people like Michael Singer.

Singer owns Timber Ridge Barn in Jefferson City, a wedding venue that was supposed to be paying for itself.

“It's gonna be a year, maybe close to two before we quit seeing the effects of this,” Singer said.

He runs the business with his wife, and they both work full-time jobs in addition to running the venue. But the money from their jobs isn’t enough to pay the bills at the venue. To make matters worse, they’re not eligible for federal assistance because they don’t have employees.

While venues are losing business, other people are able to continue working even when ceremonies are canceled or scaled back.

Paige Crabill recently quit her job in graphic design to commit to her photography business, Crabill Photo Co., full-time. Then, COVID-19 hit and brides started to reach out about postponing.

Luckily, only two of the brides she had scheduled in the coming months fully canceled. The rest are still asking her to take photos at their smaller ceremonies.

“That's nice that people are rescheduling instead of completely canceling,” Crabill said. “Because I mean, I'll still get to do the session at some point, just not right now.”

She decided to give back to the brides downsizing their ceremonies by giving them an ‘elopement package discount’ and cutting costs from $1,000 to around $360. The average wedding photography session costs $2,000.

“Weddings take a lot of work,” Crabill said. “I can't imagine putting so much work into it and then just getting it taken away so quickly.”

The @CDCGov released guidance on its website concerning #socialdistancing guidelines for large events like weddings and receptions. 6.9 out of 1,000 people are getting married in the U.S. every year. pic.twitter.com/hl4zqelEMp

According to MU professor Marty Steffens, there are a lot of factors that could prevent couples from planning a bigger wedding even into the future.

“It’s a big-ticket item. So consumers are loath to spend that now in uncertain times… it's usually a travel function,” Steffens said. “So either people traveled to attend the wedding, and then, of course, the honeymoon. So that's going to be affected as well.”

She also thinks that Columbia is uniquely situated to be especially hurt by the loss of income from weddings.

“Weddings are a multi-billion-dollar industry in the United States,” Steffens said. “So, it is a big deal. In a college town like Columbia, we have a lot of weddings, because a lot of people who are graduating or perhaps in graduate school might be getting married.”

Lindbloom had few problems rebooking her vendors for her new date, June 20. She says having a big wedding is more than a party to her, it’s a thank you to everyone who has helped her along the way.

“People have invested time and energy into both William and I to help us be successful in what is our dream,” Lindbloom said. “If we didn't honor them by having them at our wedding, it would be kind of a slap in the face to them.”

A small wedding isn’t an option for Lindbloom and she’s concerned that by the time June 20 rolls around, social distancing may still be in place.

“I'm just going to try to let all of that go and enjoy being surrounded by people that love me and that love him and that want to see us succeed," she said. "Just to be around our circle (of people) and just enjoy it.”

She plans on holding the ceremony on her property and is doing her best to keep it wedding-ready until her new date. In the meantime, she’s looking forward to the day that she’ll finally get to say ‘I do.’