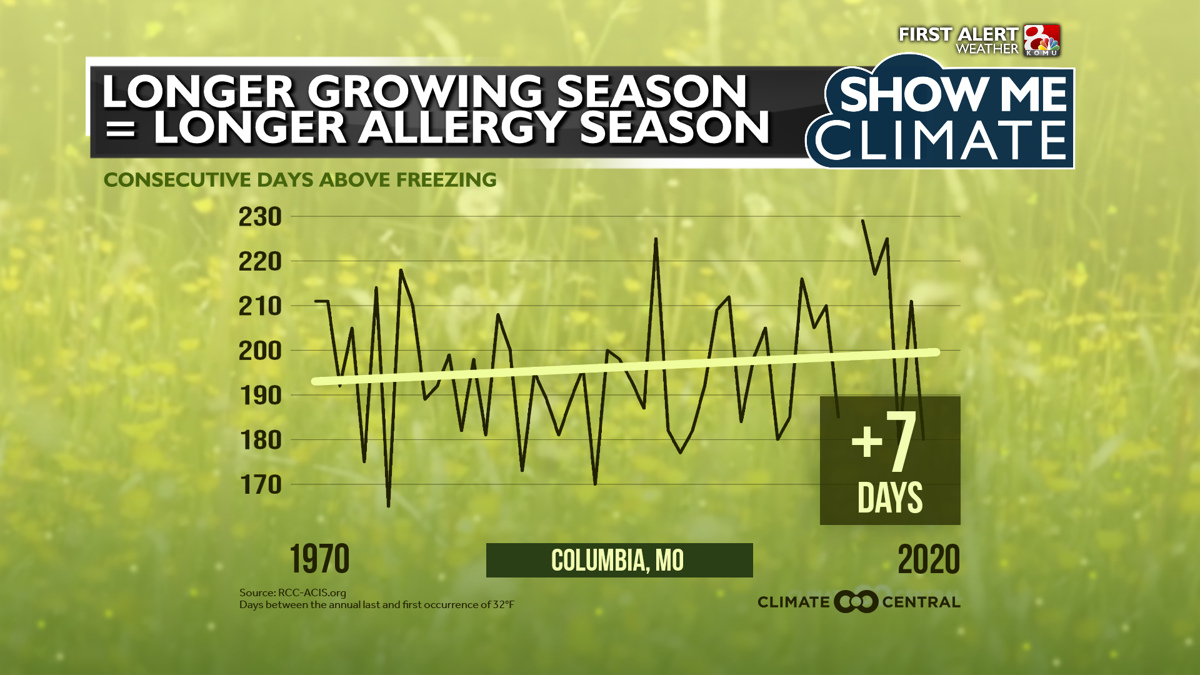 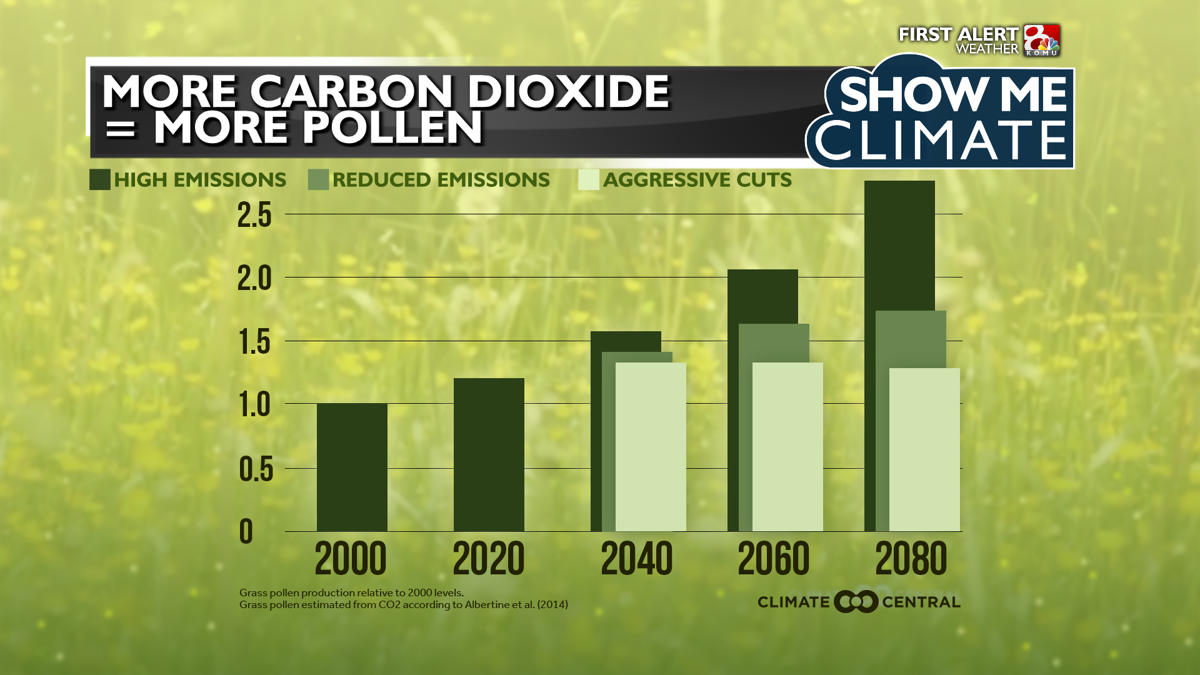 COLUMBIA - When Sherry Miller moved to Columbia from New Jersey, the heavy pollen in the air here triggered her asthma and sent her to the emergency room three times in a matter of months. In the 14 years since, she says the allergy issues she battles have gotten worse.

“It's one of those things you just wish you could get rid of,” she said. Her once seasonal allergies are now affecting her year-round, and they’ve been intensifying — she’s always on antihistamines now, and has started having more frequent sinus infections, even during the winter.

“I find that it has become like a layer, that you can scrub all you want," Miller said. "And as soon as you're done, it's still there.”

High concentrations of pollen can make life miserable for anyone and they're particularly dangerous for the one in eleven residents here who suffer from asthma. An analysis of temperature data by Climate Central shows central Missouri’s plant growing season has increased by a week since 1970 — meaning an additional week every year that pollen is in the air.

Local allergist Laurie Fowler says over the last decade the amount of pollen coating Columbia’s landscapes has noticeably increased, coupled with a growing intensity of seasonal allergy symptoms experienced by her patients.

“I used to tell patients, ‘Oh my gosh, surely next year won't be as bad as this year,’" Fowler said. "I've got to where now I’m saying, ‘It's gonna be worse.’ Because every year, it seems like it's getting worse."

A mix of plants, weather and geography affects an area’s pollen count. This matters in a state like Missouri, where you can find many trees and weeds not found in other parts of the country, coupled with long pollen seasons and increased humidity — which promotes plant growth — from the Missouri and Mississippi rivers.

Land use also plays a big role, according to Jennifer Albertine, an environmental studies lecturer at Mount Holyoke College. Albertine led research that found pollen counts from grasses alone could double in the next couple of decades, unless emissions of greenhouse gas pollution are aggressively cut.

“We tend to see higher ragweed pollen loads near agricultural lands, where it is a noxious weed for farmers," Albertine said. "Ragweed, which is the number one most allergenic plant in the USA, is a great colonizer of disturbed land.”

In a state where farms cover nearly two-thirds of the land, with one of the largest number of farms in the nation, ragweed pollen can run rampant.

With warming temperatures, “We think that there's a good case to be made that the season will be longer, the amount of pollen that you'll be exposed to will be greater, and the allergenicity of that pollen may also increase,” Ziska said.

Ziska was one of the scientists behind a new study that found rising temperatures from human-induced climate change to be the main contributor to recent changes in the timing and increasing length of the pollen season across North America.

Because asthma is more likely to affect residents belonging to low-income, minority communities, allergies caused by pollen are also unequally distributed. Understanding how environmental factors underlie health disparities like these is what Icahn School of Medicine at Mount Sinai professor Rosalind Wright specializes in.

Wright stresses the dangerous impact of climate change on childhood asthma and respiratory health. “It's a very costly disease,” she said. “It's the most common chronic disease of childhood. So the healthcare expenditures that are going to be associated with that are astronomical.”

According to the American College of Allergy, Asthma, and Immunology, more than $18 billion is spent managing allergies every year in the U.S. alone, while the medical cost of asthma is an estimated $3,200 per person, every year. The high costs of treatment mean many patients take less medicine than is needed to keep them healthy.

“The fact that people have to ration their inhaler use is so ridiculous to me,” said Margee Louisias, an instructor in medicine at Harvard Medical School, and the director of diversity and inclusion in the division of allergy and immunology at Brigham and Women’s Hospital.

She says a longer allergy season and higher pollen concentrations will continue to put heavier burdens on the most vulnerable populations, including lower-income and minority communities.

Louisias compares the national asthma prevalence in adults and children of about 10% with asthma rates from 25% to 30% among Black and Latinx populations. That disparity is linked to higher levels of air pollution in those communities from sources like highways, power plants and other industrial facilities.

As someone accustomed to suffering from allergic asthma, Sherry Miller misses what it was like over a decade ago, living in New Jersey, when she didn’t have such intense reactions to the pollen in the air around her. But she’s grateful she has the resources to lessen her symptoms.

“I feel badly for people that don't have any medical care,” she said. “They have to end up using the emergency room for their medical [needs], but they're not there to put you on a long term path to getting better.”

This story was produced through a partnership between KOMU and Climate Central, a nonadvocacy science and news group.